Roof Performance Series (Part 2): Thinking Outside the Seams With Your Welding Options 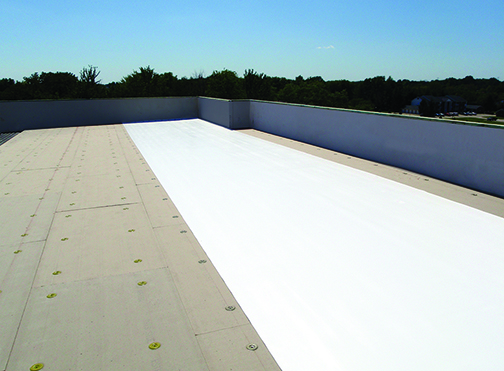 Commercial Roofing Options Have Changed with The Times
As with every industry, commercial roofing is rapidly evolving to meet changing market demands. When it comes to installing a new thermoplastic ( TPO or PVC) roofing system, facility managers now have more options. Most thermoplastic roofing systems are mechanically fastened to the structural roof deck using screws and plates or oversized washers. However, a great option called RhinoBond has been gaining traction in the commercial roofing industry for nearly a decade.

Rather than relying exclusively on in-seam fastening techniques for mechanically attached thermoplastic membranes, RhinoBond is an alternative based on microprocessor-controlled induction welding technology. The system significantly limits roof flutter, offers higher wind performance ratings with fewer fasteners and can be used in both new construction and re-roofing applications.

Think Outside the Seam
Most mechanically attached roofing assemblies are designed around in-seam fastening patterns based on specific wind loads (i.e. Factory Mutual 1-90, meaning that the wind design load is 90 lbs./sq. ft.). In traditional mechanically attached systems, insulation is secured to the roof deck using a specified number of fasteners and plates per square. A second set of fasteners and plates is then installed through the membrane along the seam and protected by an overlapping layer of the roof cover that is heat-welded in place.

With RhinoBond, the same fastener and plate is used to secure both the insulation and the membrane to the deck, thus eliminating up to 50% of the fasteners compared to a traditional approach. An FM 1-90 wind rating typically requires six fasteners per 4- x 8-foot insulation board in the field of roof area. Once the insulation fasteners and RhinoBond plates are in place, the membrane is installed over the top. As with any thermoplastic membrane, the seams are then hot-air welded according to the manufacturer’s specifications. The difference is that there are no fasteners in the seams. The last step is to bond the membrane to the RhinoBond plates installed under the membrane. Since the fasteners are installed in a grid pattern across the roof, they are relatively easy to find.

Since the fastening pattern evenly distributes the wind load, the system can achieve higher wind performance ratings with fewer fasteners. In corners and along perimeters where wind loads are strongest, additional fasteners and plates provide additional attachment points for the roofing membrane. By eliminating perimeter half sheets, there are fewer seams to weld on the roof, and fewer potential points for water intrusion.

Faster Dry-In Time
In new construction, RhinoBond can speed up the dry-in time. Depending on the project, location and weather, the membrane can sometimes be installed, seamed and bonded along the perimeter and around the penetrations before all of the plates in the roof field are welded. This allows the roofing contractor to get a large portion of the building dry before completing the induction welding process. More important, it may help the building owners get into the facility a few days earlier, which can have a big impact on the bottom line depending on the business. 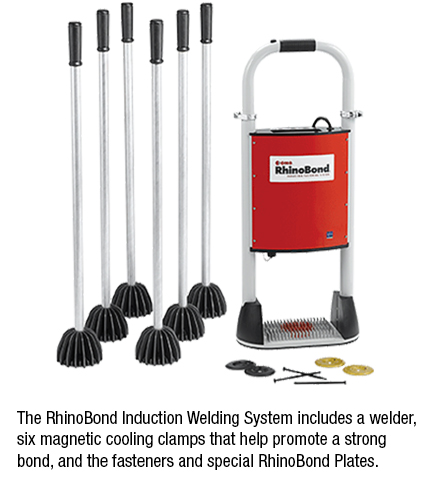 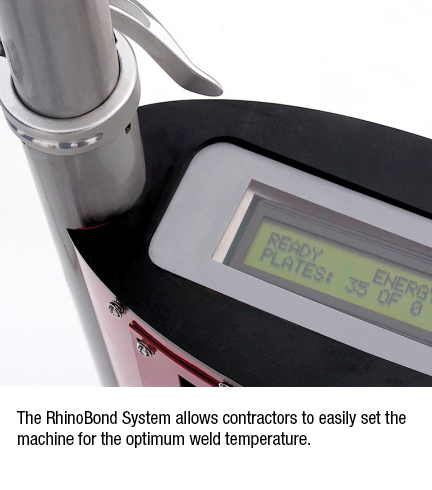 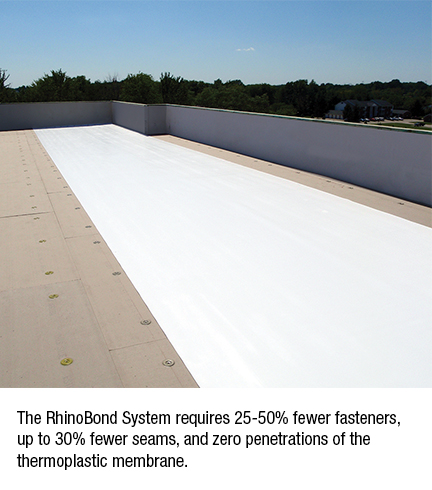 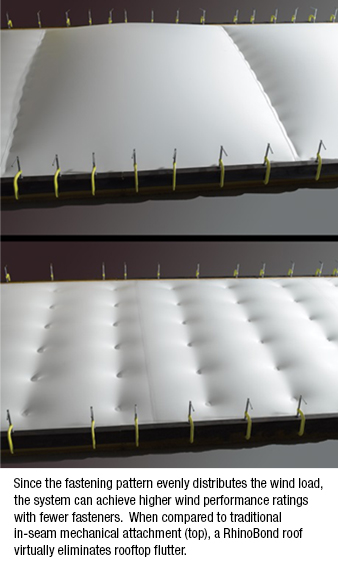 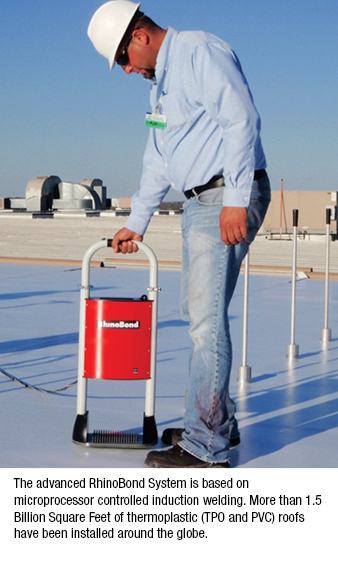