The Official Start of Hurricane Season

Hurricane season is officially on record from June 1st - November 30th each year.

Weeks and days before a storm or hurricane, schedule a roof inspection for ways to better prepare your roof.

No roof is 100% immune to the damages of microbursts, heavy winds or hurricanes. Proper construction and preventative maintenance on the roof system does help with performance. Even roofs that are properly designed and installed can fail in a weather disaster because due to flying debris.

What the National Weather Service Reports: (April 22,2015)
“A new hurricane season forecast issued by The Weather Channel on Tuesday (April 2015) says we can expect the number of named storms and hurricanes in the 2015 Atlantic season to stay below historical averages. 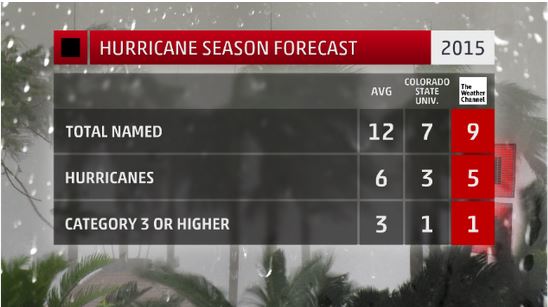 The Weather Channel forecast for below-average activity during the 2015 Atlantic hurricane season is consistent with what Colorado State University (CSU) said in its forecast issued on April 9. CSU's forecast called for seven named storms, including three hurricanes, one of which is predicted to attain major hurricane status.

The CSU outlook, headed by Dr. Phil Klotzbach in consultation with long-time hurricane expert Dr. William Gray, is based on a combination of 29 years of statistical predictors, combined with analog seasons exhibiting similar features of sea-level pressure and sea-surface temperatures in the Atlantic and eastern Pacific Oceans.