48 Years of Roofing and Flooring Excellence 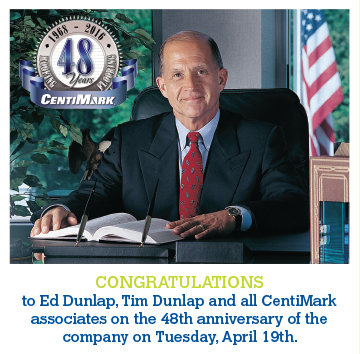 The Pittsburgh, PA based company’s name changed to Northern Industrial Maintenance and grew through geographical expansion, diversification of product lines and an aggressive National Accounts Program.

In 1987, the corporate name changed again to CentiMark Corporation. “Centi” refers to the 1987 goal of achieving $100 million in revenue (achieved in 1994). “Mark” recognizes the company’s unique contributions to the roofing industry – the first National Account program in roofing and flooring, Single Source warranties on workmanship and materials, and nationwide geographical expansion through organic growth not acquisition.

In January 2003, Timothy M. Dunlap was appointed President and Chief Operating Officer of CentiMark. Edward B. Dunlap, Founder of CentiMark, continues to serve as Chairman and Chief Executive Officer.

Today, CentiMark is the unparalleled leader in the commercial roofing and flooring industry throughout North America.