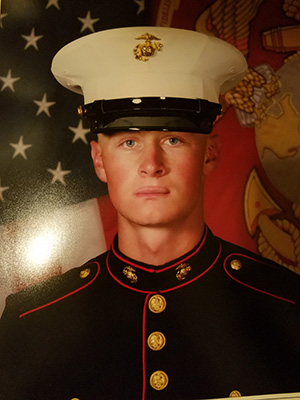 Nick Cullen is a Tech Rep at our Syracuse, NY office.
He has worked for CentiMark for five months. Nick served in the United States Marine Corps as a Corporal for 3-1/2 years.

1. Why did you join the military? My family has always served through the generations. I love my country and wanted to serve because I think in order to appreciate the freedom afforded to us, you need to understand the sacrifice it costs for that freedom.

2. How does your military experience affect your life today? It gives me perspective on life. Anytime I think things are bad, I know for a fact it could be much worse and know that there are people out there serving currently going through worse.

3. Is there a person(s) that you met in the military that changed or influenced your life? Gunnery Sgt. Turey. He was the most good-to-go Marine I served with. He embodies the Corps and its values in everything he did. He was awarded a Purple Heart in Iraq as a Platoon Sgt. and loved being a Marine.

4. What experience(s) stands out to you as the most memorable or significant? I would say when I got my Eagle Globe and Anchor (EGA) and officially became a United States Marine.

5. What should all Americans know about veterans? They are the best this country has to offer. People assume that if you join the military it’s because you cannot succeed in college. In fact, that could not be further from the truth. Less than 1% of the American populous knows what it means to serve, and, to the shock of many, vets are amongst some of the most successful people in the country after they serve. Veterans know what life is like outside of this country, unlike so many who live sheltered lives. They know what real intolerance looks like; they know what real hatred looks like; and, they know what real destruction looks like. Yet somehow, there are certain people within this country that act as if this country is the worst place in the world. Veterans deserve respect; they have earned that much. Americans need to wake up and realize they could learn a thing or two from a veteran.

6. What values, freedoms, rights did you feel that you served our country for? Everything. It's as simple as that. But even more simply put: Life, Liberty and the pursuit of happiness.