Ask any roofing contractor and they’ll tell you that wind is truly the roof’s enemy. Wind moving across a roof is affected by several factors including the shape of the roof, the location of the building, the height of the roof as well as the direction of the wind. As a result, certain sections of the roof, particularly the corners and the perimeters, are subject to higher pressures – negative or positive -- or wind loads and are at the greatest risk for failure. Baptist Health

After several major hurricanes, a study of commercial roof failures by the Roofing Industry Committee On Weather Issues (RICOWI), found that most failures – nearly 60% in fact – were due to failure of the edge metal system on the perimeter of the buildings. It was further determined that 95% of the edge metal failures were the result of poor workmanship as well as substituted light gauge materials that were not up to the standards recommended by Factory Mutual (FM) Global, the leading U.S. loss prevention and risk management company.

Why FM Global?
There are only a few sources in the U.S. of FM tested and/or approved edge metal systems. Materials marked as FM tested/approved, means that the specific components of the system – the rail or retainer, the cover and the splice plate – have been tested at Factory Mutual for performance.

To be FM approved, the system components cannot be altered from what was originally tested. That means the gauge, type and size of specific materials used must remain consistent from job to job without variation. Deviations in terms of materials, components, product sizes and even component vendors would require new FM testing. Testing at FM is expensive and time-consuming. Individual product tests can cost several thousand dollars and can take months to complete. In addition, once the testing has been completed and product manufacturing begins, FM conducts quarterly audits of the manufacturing facility to ensure that the products being produced are identical to those originally tested. As a result of the cost, time and onerous paperwork required, few companies invest in securing FM Approvals for roof edge systems. Roofing contractors and local sheet metal shops that provide edge metal periodically may not have either the sales volume or the systems in place to justify this type of expense.

Never Value Engineer the Edge
All too often building owners elect to “value engineer” edge metal for a project when presented the option. While this may save a few dollars of cost for the roofing or re-roofing project – which is likely being installed at a significant expense – they may also be putting their new roofing system at considerable risk. After all, why knowingly minimize or reduce the strength of the roof’s first line of defense to save a few dollars?

In such a scenario, the edge material provided typically has not been tested to the same performance parameters and therefore may not provide the same level of protection for the roofing system. Based on real-world experience, economizing on the edge system dramatically increases the risk of wind failure where roofs are most vulnerable. 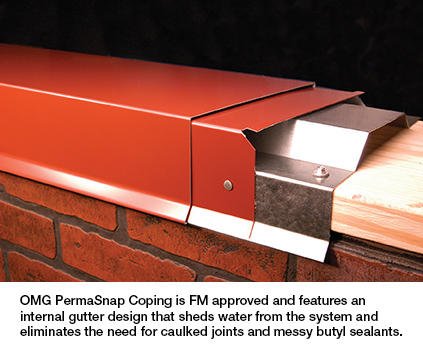 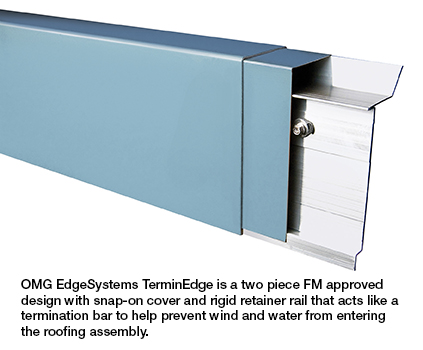