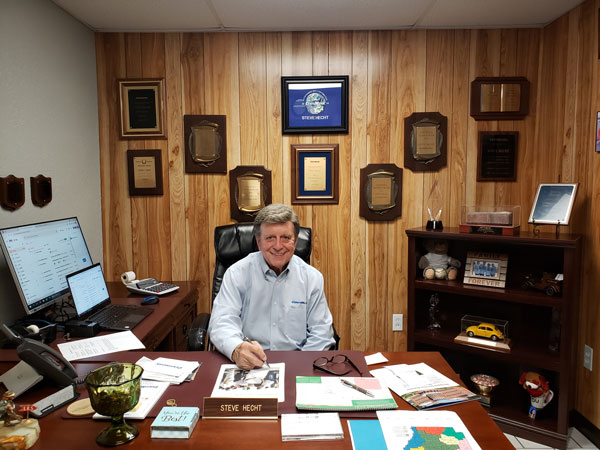 After 50 years at CentiMark, Steve Hecht has a photographic memory of his years in sales, customers, co-workers, successes and challenges. He remains as energized about his job, as dedicated to his customers and as willing to mentor younger sales representatives as he was 50 years ago. Today, he is the Director of Catholic & Christian Facilities Network Nationwide. He’s a Corporate associate, making his home in Jonesboro, AR.

Steve was the second salesman hired, trained and mentored by CentiMark Founder and Chairman, Ed Dunlap.

These first three salesmen - Ed Dunlap, Alex Wojdanowski and Steve Hecht - took turns sharing one typewriter in the office as they typed their sales proposals! Together, they were CentiMark Sales!

Steve had success in sales, started CentiMark’s National Account Program in 1983, created the first Marketing & Advertising Department and opened offices for CentiMark in Chicago, IL, Northern California and reset the sales management of Jacksonville, Ft. Lauderdale, Orlando and Tampa, FL offices. He has held many positions at CentiMark, mentored many sales representatives and relocated numerous times.

Steve did what it took to work hard, succeed in sales and management and contribute significantly to the growth of CentiMark from 1971 sales of less than $1 million to 2021 sales of $800,000 million. Steve’s footprint is on every success and growth over the past 50 years.

Steve received scores of awards over the years. In 1984, Steve increased his sales from the previous year by 59% to $2,485,286. In June 1987, he received his first million dollar sales contract from a customer and in October 1996, he sold a million dollars in flooring sales in one month. Both are a first for the company. Steve says his favorite award was a Certificate of Appreciation in 1990: For Outstanding and Dedicated Service - National Accounts.

When asked about CentiMark Founder and Chairman Ed Dunlap,  Steve gets very emotional talking about his mentor, leader and lifelong friend. Steve had experience in the manufacturing side of roofing when he joined CentiMark - Ed Dunlap taught him everything that he knew about sales. Steve says: ”Ed Dunlap is the BEST salesman ever. He taught me how to sell roofing and flooring.”

“‘There will never be another salesman like Ed Dunlap”, adds Steve. “He was so smooth - always asked the right questions; always had an answer for customers’ questions; always ready to close the deal. And in the middle of a conversation, he would always ask: ‘So, what do you like about CentiMark so far and what don’t you like?’

“Our initial sales and marketing strategy was to go through an industrial list that we purchased and mail out flyers with return postcards. Every Monday, Ed Dunlap would distribute the returned cards to Alex and me for those potential customers who indicated an interest in our services. We had one week to get in touch with the customer and ascertain their needs. If we hadn’t made the contact in a week, Ed Dunlap would take the information and call on the customer himself’!”

CentiMark’s “Mark” in National Accounts:  “In the early 1980s, Ed Dunlap realized that he was selling to large customers with a regional or national footprint in the eastern Ohio market and other CentiMark sales representatives were selling to the same customers in the Pittsburgh, PA, Buffalo, NY, Harrisburg, PA and other markets. So he said to me, ‘Consolidate these individual accounts and start a National Accounts Program. Just figure out how to do it so that one person is in charge of the account on CentiMark’s end and one person on the customer’s end’.

“On July 6, 1983, I signed an agreement with CentiMark’s first National Account customer - U-Haul. Today, CentiMark’s National Accounts Program has grown to a comprehensive partnership with thousands of national customers to help them understand their multiple properties and make informed business decisions about their roofing and flooring needs.”

CentiMark’s “Mark” on the technology of EPDM Roofing: “CentiMark turned the corner in 1977-1978. Ed Dunlap learned about a new roofing membrane called EPDM - rubber roofing. Because he is a visionary, he took a huge chance with EPDM roofing membranes. I sold the first EPDM job to St. Mary’s School, St. Mary’s, PA in 1978. CentiMark’s President and CEO, Tim Dunlap, was just starting his career with the company in 1978 and he was working on the crew of that first EPDM roof job!

Thank you Steve for your hard work and dedication over the past 50 years at CentiMark! Let’s celebrate once again when we achieve our goal of One Billion dollars in sales!